Shell
Rolling Rhino; convert Ubuntu into a rolling release as seen on YouTube

Convert Ubuntu into a "rolling release" that tracks the devel series; for the toughest of Ubuntu users.

Rolling Rhino is a simple tool to convert Ubuntu Desktop, and the official desktop flavours, that has been installed from a daily image into a "rolling release" by opting into and tracking the devel series.

Rolling Rhino is intended for Ubuntu developers and experienced Ubuntu users who want to install Ubuntu once and the track all development updates with automatic tracking of subsequent series.

If you use Rolling Rhino to opt-in to devel series you're assuming support of your system, including taking care of PPA migrations, cleaning obsolete/orphaned packages and actively participating in any issue resolution for problems you may encounter via Launchpad using tools such as apport and ubuntu-bug.

Ubuntu Podcast had feedback about making Ubuntu a rolling release, something we discussed during the main segment of S13E12 - Red Sky in the Morning and then covered again based on listener feedback during S13E14 - Ace of Spades. During episode S13E14 guest presenter Stuart Langridge proposed "Ubuntu Rolling Rhino" as the name for a rolling Ubuntu release along with some ideas as to how it could be implemented. Sergio Schvezov then followed up via Twitter reminding us that the devel series exists in Ubuntu. This inspired me to create this rolling-rhino tool to somewhat implement Stuart's idea by taking advantage of the devel series.

Where it all came together

See the video where I worked with the community to put together the initial implementation of rolling-rhino. 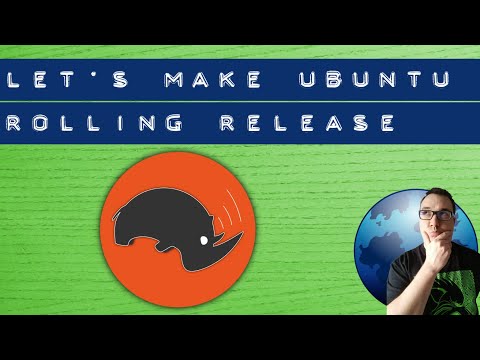